To celebrate its top players and a banner year, CCP Games created a personalised year-in-review video for the EVE Online community. Deployed to over a million pilots, the “My Year in EVE” campaign allowed gamers to handpick achievements to include in their video, then generate that video in real time with the click of a button.

No two videos in the campaign were alike, meaning each player had a truly unique year-in-review. Watch below to see.

For CCP Games, a company known for innovation, an immersive Personalised Video campaign was a natural choice. Here’s what they have to say about it.

“Working with Idomoo on the Personalised Videos for EVE Online players has enabled our players to relive their most exciting memories from throughout the year. We’re looking forward to building on the foundation we’ve laid so far and enhance and expand the end-of-year recaps for all of New Eden’s inhabitants.”

It’s the second year the company deployed a personalised recap video to its massive player base, following up on a successful pilot project in 2019. But this recent version had a user-generated-content spin, letting players customize their video by choosing what they wanted to see in their recap.

And it all happened in real time. Players picked the stats they wanted, pressed a button to generate and instantly were able to watch their video. Here are just a few ways each video was personalised:

After creating their year-in-review, players shared it on social media, boosting brand mentions across the web. CCP Games took the campaign a step further with upselling and player acquisition. To create a video, users had to be an active Omega pilot or upgrade to Omega, EVE Online’s premium subscription.

Players could also share their personalised landing page, featuring a sign-up option for friends. When a friend signed up, both players were rewarded with extra points. 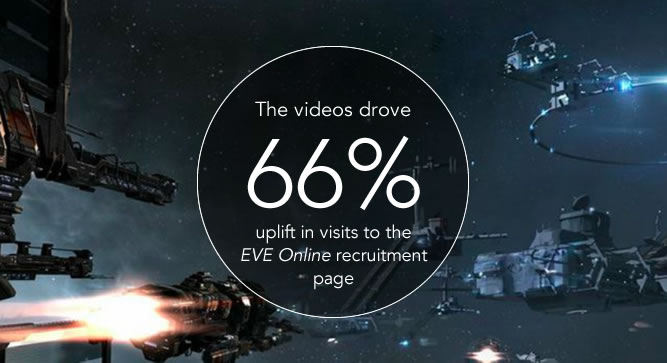 All told, the videos drove a 66% uplift in visits to the EVE Online recruitment page, one of the top goals for the campaign. With the success of this campaign, CCP Games is already looking ahead at more ways to use Idomoo Personalised Video to engage players, such as special offers and cross-selling opportunities.

Are we ready? Absolutely.

The gaming industry is a natural fit for the immersive, storytelling experience we offer through data-driven video. We’ve worked with several gaming companies, including Ubisoft, Activision and Epic Games, to create digital campaigns that wow players.

“Personalised Video allows for a unique one-to-one emotional experience that video game enthusiasts not only appreciate but expect,” explains Danny Kalish, Idomoo CTO. “We’re excited to continue our partnership with CCP Games to inspire and grow the EVE Online community.”

Want to read more about our work in gaming? Check out our blog post about our recent campaign with Ubisoft and its 100 million players.

If you’re ready to see how Personalized Video can take your customer or player experience to the next level, click below. We’d love to connect. Cheryl Rodewig
Cheryl is a marketer and journalist published with international magazines and brands. She loves using data to craft meaningful stories and build connections with diverse audiences. Email Personalization: Tips for Cutting Through The Clutter

Email marketing is a tried and true strategy. But in today’s digital age, cutting through the clutter of your customers’ inboxes is trickier than ever before. Today, an estimated 333 billion emails are delivered and received every day. But brands have found a way to rise above the digital noise: By personalizing their email marketing campaigns. By using this strategy, businesses are able to reach more customers, boost engagement and build stronger relationships. To help you get started, we’ll cover why email personalization works (hint: it makes people feel heard) and the tips and tricks you need to effectively personalize your email marketing campaigns. The Issue With Generic Emails Generic emails are impersonal, and this comes with consequences. For one, customers don’t want to be treated like numbers. Brand communications should make customers feel valued — not another sales grab. On top of that, you also risk sending a message

In today’s business climate, customer loyalty is increasingly elusive. According to research from Inmar Intelligence, almost 65% of consumers have switched brands either “often” or “very often” within the past three months. With that being said, it’s more important than ever to make the most of your current customers — and increasing your customer lifetime value is a great way to start. Boost your customer loyalty. Encourage repeat business. Watch your bottom line grow — it’s all possible when you start investing in ways to increase your customer lifetime value. We’ll share our five top tips and tricks to help keep your CLV high throughout the customer journey. Ready to get started? Let’s go. What Is Customer Lifetime Value? Customer lifetime value (CLTV) measures the value of a customer over the course of their relationship with that business. It shows the total revenue a brand can expect to earn from

Our Personalized Video campaign with Lewis University was a huge success — just ask the experts. The data-driven campaign earned gold in this year’s dotCOMM Awards under the category Video: Educational Institution. It consisted of short videos personalized to every viewer’s relevant financial aid awards, addressing one of the most important aspects of college — how students are going to pay for it. What Are the dotCOMM Awards? The dotCOMM Awards is an international competition run by the Association of Marketing and Communication Professionals (AMCP), celebrating creative professionals and their work in digital communications. The awards recognize the role applicants play in how products and services are marketed. This year’s judges, all highly regarded professionals within their respective industries, saw a pool of incredibly diverse applications. Over 2,500 entries were received from various countries and professions for over 241 categories. The awards were judged on several criteria, including quality, creativity